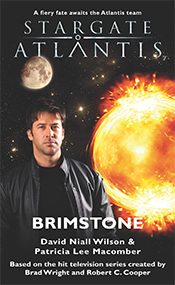 you’ve listened in on any of my podcasts with the Gateworld guys, you know by now that I’m an enormous fan of all things Stargate — be it Stargate Universe, Stargate Atlantis, or the original flavor: Stargate SG-1.   While each series has added a distinctive “flavor” to the Stargate palate, they all do the same thing: take us on a journey which not only explores the great “what’s out there,” but also how humanity can, when faced with the challenge, find it within ourselves to meet that challenge.

Fellow Fandemonium authors David Niall Wilson & Patricia Lee Macomber have just released a new Stargate Atlantis novel:  Brimstone.   If you’ve missed SGA as much as I have, you’ve probably already ordered your copy.  It’s a fun read with plenty of Sheppard & Co., as well as lots of Ancienty (what?  It’s a word!) threads to add to the franchise’s tapestry.  To celebrate the book’s release, I thought it might be fun to have David and Patricia share their collaborative experience in bringing this adventure to us.  I hope you’ll enjoy their post and their book as well!

Collaboration is something I’ve been doing since the early days of my career.  Collaborating with Trish is a particular delight, because we share so many things, finish one another’s thoughts and sentences, and the “connection’ is always there.  When we first met, we collaborated on a screenplay titled Picadilly.  It’s the story of a homeless woman who finds a medallion that lets her talk to cats.  The problem is, when she’s wearing it, she sounds like a cat to dogs and other people, as well.  It was fun, and it led to an amazing relationship that has taken us through years and resulted in a lot of creative sharing – including our finest collaboration, our daughter Katie.

We’ve written a number of short stories together, including “The Purloined Prose,” which first appeared in two parts in Dark Discoveries magazine, and “Sing a Song of Sixth Sense,” that has been published several times, first in a charity anthology where the money went to protect abused animals.

Stargate Atlantis: Brimstone, was a different thing altogether.  We are both big science fiction fans, and though we both loved X-Files and Star Trek, this is one of the first bits of fandom that we joined as a couple.  We watched Rodney and Sheppard through all their seasons, saw commanders come and go, and we were thrilled to get the opportunity to add something more permanent to the canon.

I’ve written some licensed fiction in the past.  I wrote Star Trek Voyager #12, Chrysalis back in 1999 and a number of novels for White Wolf Publications.  Trish and I wrote a Room 59 novel together, though it was ghosted and even the person we ghosted it for didn’t have his name on the cover, as it has a series author title.  That was a good warm-up.

Trish was able to bring a different perspective to the table. She has a bunch of professional writing credits of her own, and has won the Bram Stoker award for her editing, but she started out writing fan fiction, and she understands how to turn what might be a dull, mechanical story into something that will appeal to readers who love the show, and the characters.

I’m going to turn this over to her after I say a bit about the book itself. Though Sheppard and the more action-oriented characters will always stick with me, the character I most loved on Stargate Atlantis was Rodney. I wanted to do something that would bring that character a new dimension – and I think, maybe, I did that. I won’t give anything away, but I think Rodney fans will be happy with the part he plays in this one, while we didn’t skimp on any of the others. Maybe David Hewlett will read the book someday and enjoy it.

David and I do collaborate well, indeed. We are sort of yin and yang, though. David relies more on plot and I on characters. I started out writing Star Trek fan fiction back in the days when Sondra Marshak et al were cranking out the ‘zines in their garages on old mimeo machines. Yes, I’m that old. I was drawn in by the characters rather than the science (which I was horrible at in high school, thank you Mr. Gibson) or the plot. The same holds true for X-files. I adored the interplay between Mulder and Scully and I loved writing for them. That’s how I see it, really. I write for the characters and the readers who love them. There are a lot of things I would love to do with those characters still.

I watched Stargate when it first came out in the theaters. The actors and characters stuck with me and I remember thinking that it would make a terrific TV series. I had no idea that, decades later, I would be fortunate enough to write a Stargate-based novel with the love of my life. The one thing that I admire about Stargate– and which it shares with Star Trek– is the ability to put women in very commanding, heroic roles. The characters of Ronon and Teyla weren’t around in the old days, but they became fast favorites when I started watching Atlantis. I think I am drawn most to the more physical characters, whereas David is more drawn to the cerebral. He is also much better at and more tolerant of research than I am.

The one question I get asked a lot is, “Will you do another Stargate novel?” Given half a chance, yes, I would. If TV shows can have a profound effect on your life, then I count Stargate, Star Trek, and X-files among the shows that have had the most profound effect. I have dozens of plots floating around in my brain at any one time, enough to keep those three shows in novels for years. And we won’t even discuss the Buffy-verse. That could keep me busy until I buy my rocking chair and head to the home. But there’s this one little plot, all neatly tied up in bows. It’s straining at its bindings, trying to escape. It involves Stargate Atlantis, a free-floating planet, and the alteration of Earth’s entire history. Then there’s the story of the girl who won’t die….